Here we are.
500 reviews later and still going. 29th June 2015 I put up my first review on r/Scotch, but I had already been reviewing whiskies since 2013 when my girlfriend went to Canada for 2 months and I had all the time in the world to get critically obsessed with something. Luckily it was whisky and not cocaine. Since then, I’ve put everything into learning as much as I can about this amazing drink and it’s given me a job and I’ve met loads of awesome people.
So, what do I review for my 500th? A 40 year old Brora, a 1960’s Ardbeg or something even rarer? Perhaps a pre-release? So pre that it probably won’t be released for a few years? Wouldn’t that be something?
Where’s he going with this then? 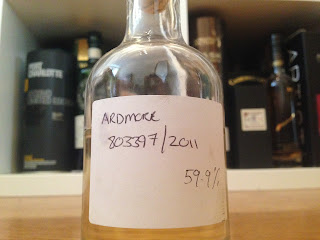 Well, I put together my whisky budget for the year and blew it all at once on a barrel. I bought a barrel of whisky.
It’s an Ardmore from 2011, distilled on the summer solstice, when the stars aligned and all that jazz. It’s been maturing in a 2nd fill Bourbon barrel for 6 years so far. It was filled with 191.8 litres of spirit at 63.4%, and currently is at a strength of 59.9%.

Why did I buy a barrel? To have my own private reserve? To better understand how whisky matures by tasting it each year? Or to sell it?
Well, the idea is to bottle it in a few years’ time, and by buying a few more casks, perhaps start a very, very small whisky company. I’ll be calling it The Cove (it’s a play on my last name, also smugglers and ting), with artwork for each label done by my talented wife (You can follow her in Instagram here). At the moment, I’m on the lookout for a Ledaig because I’m a huge fanboy of it and owning a barrel of it would be a dream come true. So perhaps in 2020 I’ll have a few to release together.
How did I buy a barrel, I hear you ask? Through Whiskybroker.co.uk, and I have to say they have been fantastic with answering every question and making the whole process very easy. They have some very reasonable prices too when compared to somewhere like cask88 (although they have a much bigger selection, and if you’re looking for a barrel of 21yo Ardbeg it’s yours for a sweet 36 grand).

The problem is that I, of course, am going to be hugely biased when I tell you that my whisky is great, so I gave some whisky friends a sample. I did it cleverly though, as I have a bottle of an 11yo Ardmore from the SMWS from a 2nd fill Bourbon barrel at a similar strength. So, I gave them a sample of each and labelled them #1 and #2. Number 1 was my barrel and number 2 was the 11yo SMWS Ardmore. This is what they came back with:

Taster 2:
Both: Really complex with a lot going on – smoky, yet creamy with caramel, oak, and even some fruit (citrus and hints of other fruits) and, of course, vanilla! I really enjoyed them both and, although, clearly from the same stable, and still quite young, I thought #2 was more balanced.
Favourite: #2

Of course, I was hugely pleased with this amazing feedback! Everyone loved the whisky, and two out of three said they preferred my barrel to the SMWS!
Now, onto my own notes. The first time I had it, I just poured some in a glencairn and drank it to enjoy it. I wasn’t assessing it or reviewing it at all. These notes are from my second encounter. It feels a bit strange to review my own whisky but I tried to remove my bias and just assess what’s in the glass. I also reviewed it a bit different to normal, as I wanted to try it at different strengths to see if it might be better at a lower bottling strength.

Colour: Straw
Viscosity: Legs- High, Bubbles (on shaking the glass)- Low
Body: Medium/Full
Nose: I can smell the new make this time. From a glencairn, just enjoying it, I didn’t get that. Clean, young smoky spirit. Like a young Laga. Smoked green apple, peaty grist, a little lemon pith. From the glencairn I got HP sauce, but can’t find it here now. BUT there is a hint of something unami, like frying oily fat?
Taste: Intense, it’s big and ALL about the mouthfeel. Very oily and viscous, really covers the mouth. Arrival is intense and soft together, smoky at first with minerality and crisp green apple, then lemon develops with more mineral smoke running through it. Apple and lemon into the finish.
Finish: Long length. Lovely long finish, the oils really clinging to the sides of the mouth. Smoky green apple, with gristy peaty…ness.
Score: High 70’s

Water (46-50%):
Nose: Younger maybe? But more fruit with the green apple dominating. A little unami again.
Taste: Soft, great arrival, then spicy! Fresh ginger, lots of it, lovely soft oak, peat, then loads of minerality with licking stony pebbles.
Finish: Medium length. More green apple again and more peat than without water.
Score: High 70’s, maybe not quite as good as at cask strength but love the minerality that comes out.

Yep, it is young but it is also very good at the moment. Personally I think it needs another few years to reach greatness, and, really, I would want to release things that I would score in the 80’s.
The plan for this at the moment is to release it in 2020 at 9 years old. I would love to release three at the same time, focussed on the three things I really look for in a whisky: Complexity, balance and power.

Anyone else a barrel owner? Let me know!
That’s all from me for now. Sláinte!
Posted by David Cover at 06:29