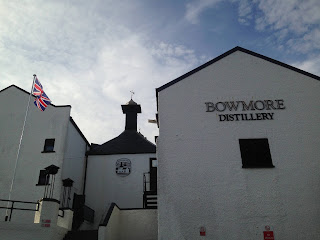 Hey guys, back with part 2 of the Scotchtrip, my first day in Islay. I'm sorry but it's a long one.

The first tour we did on Islay was Bowmore.

The tour itself was great. Bowmore have their own maltings, although they can only produce enough for 10-15% of the whisky. The focus of the tour was on how they've kept everything traditional, including Oregan Pine washbacks. This was interesting because we got to see a side by side comparison of different stages of the fermentation: after 1 hour, 15 hours, 30 hours and 48 hours. We also got a look in the warehouse and then the tour ended back at the tasting bar, overlooking the sea. We were given a dram of Bowmore 12 in a tumbler. A tumbler, wow, wasn't expecting that. Whatever. Pretty boring stuff, smelt of marzipan and I'd had it before. Then I asked to try the new batch of Tempest, I'd tried batch 4 and really liked it so was interested to try batch 6.

Water: Raisins and pastry. Marzipan and cinnamon after a bit.

Water: More peat. Cinnamon and marzipan after a bit.

Notes: Not as good as batch 4.

Then I spotted a bottle of the sherried Feis Ile.

After that cheeky number I popped into the shop to not spend my money and saw they had Gold Reef out to taste.

Taste: Soft and easy, some peat. 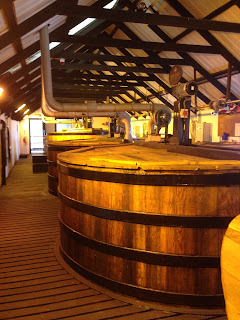 Didn't buy anything in the shop. It's a shame because Bowmore can make fantastic whisky, it's just most of the time they don't.

Onto Caol Ila. It's huge. Absolutely colossal. The mash tun is like a huge spaceship, they've stuck with wooden washbacks at the moment but they may be replacing them in a few years. Massive stills looking out onto the ocean with a control room that looks like it's been stolen out of Startrek. After all that we went out to the old abandoned cooperage. Which is really cold but that's where you do the tastings. You could choose two tastings out of the 12, DE or Moch. I'd tried the 12 so went with the DE and Moch.

Finish: Short/Medium length. Fresh smoke with a hint of salt.

The Moch took me by surprise in that's it not bad. They also had some barrels for a premium tasting and I asked. The guide replied that the sherry cask was terrible so they might be throwing it out. A bit cheekily I ask whether I could have some.

Water: Old wood and floral spice. Then more alcohol and a bit of harsh spice.

Notes: Not too bad, the cask's just gotten the best of it. I quite liked it.

Stumbling back into the car I realised I hadn't spent any money again. What a result!

Bunnahabhain was just round the corner, so there next. Good tour with a guy who kept slapping his palm with back of his hand to emphasise important points. Wooden washbacks again and the ridiculous shape of the spirit stills give an oiliness to the spirit, but the distillation is done based on time (fast basically), which I think can make the spirit quite harsh.
At the end we went back up to the shop for a taste of the 12 (which I've had) and the Toiteach. 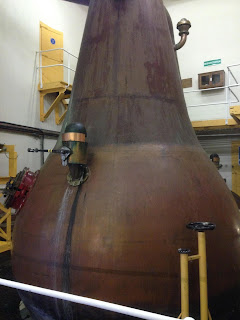 Didn't end up buying anything at Bunna either, except for a miniature of Deanston 12 that I've wanted to try.

Sorry it's been a long one. If you made it this far, well done.

Up next: Part 3: Laphroaig.