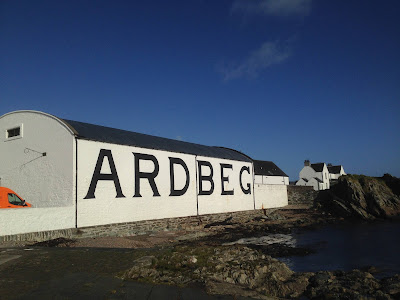 Unfortunately Lagavulin was not doing normal tours and was closed for refurbishment. I wasn't really that bothered because (wait for it) I don't really like Lagavulin that much (cue angry mob at my door). Although I must admit I'd only tried the 16yo. Thankfully I stopped to have a look in the shop on the way to Ardbeg to correct my outlook of this distillery. I'd always been curious about the 12yo Cask Strength, they didn't have the new 2015 edition but they did have 2014. When I asked to try some I was shown into a very comfy small lounge with sofas and displays.

A great whisky, well above the 16yo which I normally score 73/100. Lagavulin can be great when it's not chill filtered too much, watered down too much and had colouring added. Perceptions shattered.

Now onto the exciting stuff: Ardbeg.
So here we were, what I thought would be the pinnacle of the trip: the decades tour at Ardbeg. A tour with a tasting of Ardbeg from each decade since 1970.
They had changed the time on my tour to earlier, so I turned up and was told that the tour was free because they'd changed the time. Free. FRREEEE!!! £35 would be a great deal for what you get on the tour. But free was fucking epic. Thanks Ardbeg!!
The guy taking the tour (damn I can't remember his name) was very professional and knew his stuff. I was on the tour with 9 huge Norwegian guys who were great fun and loved Ardbeg.
So the tour started outside on the rocks right out by the sea. The guide poured us a healthy dram of the Perpetuum Distillery Release and we had it during an in depth history of Ardbeg. Right there with the wind and sea crashing around us. Good start, good thing it wasn't raining. 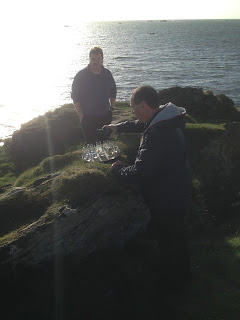 After that we went on a detailed tour of the distillery. No photos I'm afraid because health and safety.
No maltings, too expensive and inconsistent, so malt is brought in from Port Ellen, peated to 55-60ppm. Last 3 years they've been using Concerto but the next 3 years they'll be using Optic. Interesting.

Bobby mill then mashing in another huge spaceship-like mash tun. Think it's fairly new. Then wooden washbacks, which the guide explained give an oily mouthfeel to the spirit because of the bacteria that live in the wood. However, he is of the opinion that wooden washbacks are coming to an end and that if European legislation changes so that the wine industry can only use steel then whisky will follow. Good to know.
We then went to the still room. Ardbeg's stills are pretty big and the spirit still has a purifier that returns the heavier oily compounds to the pot to be redistilled, giving Ardbeg a light citrus-y-ness.

The guide also said that Ardbeg had had a surprise visit from HMRC the other week and they'd been caught out on loads of things. The main one being leaving the spirit safe open. So of course it was still open. We got to taste a little each too.
Low Wines 26%: Oily smoke, some hay and grass.
Spirit 69%: Very oily, some lime, engine oil, hay and malt.
After that we went to the filling store. Mainly Jim Beam/Jack Daniels barrels are used but only for 2 fills.
We also got to see the trench where they dump the barrels for the whisky to be filtered and bottled. One of the Norwegian guys, in a stroke of genius, asks about the whisky dregs left in the bottom of the trench. The guide replies that it would probably be some whisky left from the last batch. A batch of 10 year old maybe, 30-40 barrels maybe. Of course then we had to try it.

Anyway, after all that it was onto the tasting. Upstairs in a sort of boardroom we sat down and were shown the whiskies we would taste. A 1976 Ardbeg, bottled 2002. Then 1998 Sherry, 2000 bourbon and a 2005 French oak finish. All cask samples. 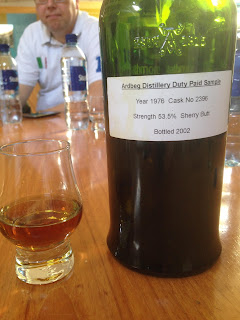 Colour: Dark Amber
Body: Medium
Nose: Rich and heavily sherried as expected from 26 years in a 1st fill Butt. Stewed fruit, raisin, date, fig. Still some fresh lime citrus. Orange too. A light cinnamon spice with honey, syrup and a little medicinal note- Cough sweets.
Water: More medicinal.
Taste: Tropical fresh arrival, citrus fruit, lots of orange, building sherry- Raisin with lots of spice. A little smoke still left but mouth coating and oily.
Water: More easy arrival, less spicy, but it builds with a complex citrus smoke. Really comes together, amazing.
Finish: Long/Very long length. Sherried spice and raisin, then a wisp of smoke.
Notes: Unfortunately I didn't get as much time to appreciate this as I hoped. It was really coming together and it was onto the next one. Again, if I'd had more time it might have gotten into the fabled 90's.
89/100 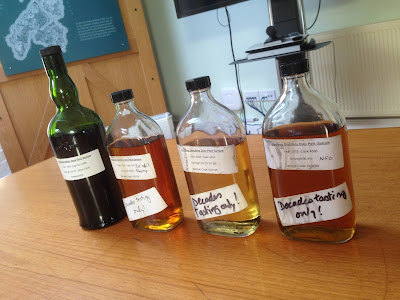 Overall a great tour and fantastic whisky. Ardbeg make some good stuff. After the tour and being pretty drunk I sobered up with some food in the cafe, which was really good.
Ended up buying a Oog and a Corry. Was tempted by Supernova and Kildalton but double the price for more collectable whiskies implies to me that they won't be worth it, even if the Kildalton box is badass.